How I Recovered From Alcoholism? Long Story Of My Life 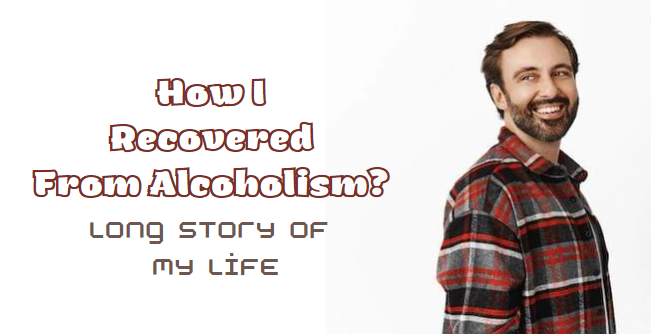 My name is James, I am from Bloomington, IL. And I will tell you my story of treating alcohol addiction. All alcoholics undergo 3 stages in the alcohol addiction: first, alcohol is your friend (people without addiction can be at this stage all their lives), then an enemy, then a master. I don’t know who said it, but the idea is absolutely correct. When I was a student, alcohol was my best friend: it loosen up. I felt like I belonged to society. It was easier to communicate with girls. It helped me write, create, even take exams.

The alcohol became my enemy about 7 years later (although I must say that the transitions from stage to stage are very conditional, some symptoms of alcoholism may manifest earlier, some later). I was already openly abusing: I always drank more than I should have, and almost every day, with rare exceptions — but I could stop myself and take a break. Alcohol continued to help me: it served as a social relaxant, helped me out when I needed to relieve stress. But bad calls have already begun to arrive. Entertainment associated with alcohol (watching a movie at home while drinking something strong) began to displace all others (sports, for example).

There was a pronounced hangover, there were blackouts in memory. I got into the habit of improving my health with beer after I overdo it again. While I was at a hired job, I did not allow myself to skip it because of alcohol, but when I started working for myself, I began to dissolve more. And although I knew perfectly well that all these were signs of an addiction, I didn’t see anything terrible in it: I was sure that I could control everything. But gradually I began to drink more and more often — and after a while I was sober for a rare day: sometimes I could drink two liters of strong alcohol in a day.

I moved to the third stage, when alcohol finally began to dominate my life, about a year in 2015. I drank very hard then: every day and a lot, regardless of the time of day and the situation. I stopped with great difficulty, for a short time, and then only because my wife or mother asked me to. But then I tipping over into another binge. I couldn’t control myself in a state of intoxication — and every now and then I behaved in such a way that I could easily kill myself. At work, I messed up a lot: I forgot about the arrangements, missed meetings, framed people. My wife at some point could not stand it and left me. But at that moment I didn’t care.

The first attempts to recover

Alcoholism is a disease. In the International Classification of Diseases, the symptoms are clearly described: a strong desire to take alcohol, difficulties in controlling its use, an increase in the permissible limits of use, a state of abstinence and others. What exactly leads to the development of alcoholism is not completely clear: apparently, genetic, physiological, and psychological factors play a significant role here.

An alcoholic has a twisted system of values, the highest of which is alcohol. Family, money, love went into the background. Yes, the addiction can be stopped by willpower, for example, if a loved one tearfully asks him about it, and even hold out for a year or two. But alcohol will find a way to cheat both. One day, a conviction will arise in my head: you haven’t been drinking for so long, so you’ve recovered and can afford a little. And after that, the person will quickly come to the same state in which he was before he has quitted.

I’ve probably tried everything I can. I addressed a psychologist for the first time in 2014, after I ruined New Year’s holidays. My wife and I went to the south of the United States, rented a car, drove around the country. You may ask where we took out funds – nothing special. We have issued short-term loan, all the details we have known through https://www.fnbstaunton.com/payday-loans-bloomington-il. All the information collected is actual.

I hardly drank—I had to drive a car. And when we got to Mexico and returned the car, the deterrent was gone. Unfortunately, there was a bar in the apartment we rented. And by the end of the week, a real binge began. No persuasion of my wife worked, I drank everything I saw. Our local friends transported me to the airport. Naturally, when we returned, my wife told me that I had to pull myself together: she was pregnant, and it was very important that there was as little stress in her life as possible before giving birth. I have consulted both top psychiatrists and addiction specialists. But there was no result.

In 2015, I was hospitalized to a drug treatment clinic for the first time. It was also not of my own volition — my friends brought me straight from the plane to it after an alcoholic marathon that I arranged on vacation in Mexico.

What do they do in such clinics? First of all, they physically take you out of a state of binge drinking, remove its acute manifestations (the nervous system is so overstressed that you literally shake) and detoxify you: within 4-7 days, special medications are administered with dropping tubes or injections. I have been detoxified probably 20-30 times over the years (by the way, you can call narcologists with droppers at home).

After that, in a good way, social and psychological rehabilitation is needed – usually it can be done right there in the clinic. The task of rehabilitation is the same as that of a psychologist: to understand why you drink, to make you stop feeling the need for it, and to help you adapt to a normal human life without alcohol. But at the same time, you are completely isolated from the outside world, and therefore from the opportunity to get drunk. Instead, you go — this is mandatory — to individual conversations with psychologists, to group classes, do various exercises (describe your emotions, for example).

I have been through such rehabilitation four times. And, to be honest, until the last time I did it half-voluntarily, and sabotaged the process itself. For example, in the first private clinic where I went to rehabilitation on the initiative of my mother, everyone’s phones were taken away without fail. But not with me. I told so convincingly that the phone is vital to me: I have to run a business. I was supposed to spend three months in the clinic. I quickly figured out how to simulate an internal psychological transformation. I gave out the necessary set of reactions, thoughts and conclusions that were supposed to indicate that I was ready for a new sober life. And I was discharged after a month and a half. I immediately went on a binge, and 5 days later my mother brought me back to the same clinic. To say that the guys there were shocked when they realized that I had deceived them is to say nothing.

Why did I behave like this? The fact is that I didn’t want to be treated for a very long time. I was ready, spitting on everything, to drink to the last, because I seriously believed that this was my fate. And I went to psychologists and lay in clinics solely because it was important for my loved ones: for my wife and for my mother. That was the main problem. It is impossible to overcome alcoholism for the sake of someone: the chance to cope with addiction will appear only when you realize that for some reason you need it yourself. To be honest, I can’t remember exactly when this desire to get rid of alcoholism began to germinate in me. But I think something started to change during the last rehabilitation in the clinic in the summer of 2019. The consultant who worked there gave me a therapeutic task: to write about my life plans. I took the paper, started writing abstractly, what I would like. He started discussing it with me. And then he says, “Well, listen, you don’t want anything incredible, everything is quite realistic.” And then it hit me: I clearly understood a simple thing — if there are goals that I am quite capable of achieving, then I have something to live for. Therefore, it is worth trying to start all over again. And I started and improved my life for better!

That’s my story and I hope my story will be informatory for other people suffering the same addiction as I had been.